We have learned of your upcoming role co-hosting the BBC’s ‘You Decide’ show, which will select Britain’s representative for Eurovision 2019, hosted in Israel, and we ask you to please cancel your participation.

We ask you to do so because, as Palestinians and allies concerned with human rights and equality, we know that by lending your name to an event such as this one, you will be part of an attempt by the Israeli government to artwash its ongoing crimes against the Palestinian people. Our values around entertainment and freedom of expression must include everyone, including the Palestinian people.

Eurovision 2019’s slogan is ‘Dare to Dream’, a theme which the official website describes as symbolising the competition’s core values of inclusion, diversity, and unity. These fundamental values should be used to extend freedom, dignity and human rights to all people – not be manipulated to serve the agendas of oppressive governments – in Israel, or anywhere in the world. We believe that no entertainer wants to be used to distract from crimes such as apartheid and military occupation.

For decades, Palestinians have been struggling against colonial policies which are designed to take away their land, and attack their lives and freedoms. We stand in solidarity with the Palestinians – including members of the Palestinian cultural community – who continue to resist Israel’s ongoing discriminatory policies, and ‘dare to dream’ of a reality in which they can enjoy the rights and freedoms which should be available to all people.

While Israel hosts Eurovision in Tel Aviv, it will continue its policy of deliberately targeting Palestinian culture. On 9th August 2018, a series of Israeli airstrikes deliberately and completely destroyed the al-Meshal Foundation, one of the few cultural spaces left for Palestinians in the Gaza Strip – just 40 miles away Tel Aviv where Eurovision 2019 will take place. Israel has shuttered Palestinian cinemas and theatres, banned cultural events (particularly at cultural institutions run by Palestinian citizens of Israel), denied Palestinian artists travel permits, and detained countless others without charge. Whether in the besieged Gaza Strip, occupied West Bank or living in Israel as second-class citizens, Palestinians constantly have their right to express their culture scuppered by Israel’s policies.

British feminist group The Tuts courageously announced they had refused to enter the BBC’s You Decide show. This follows calls from Palestinian cultural organisations, hundreds of prominent artists including one Eurovision winner, and tens of thousands of people to refuse to participate in the contest. We ask you to take a stand against the erasure of the dreams of indigenous people, and cancel your participation in ‘You Decide’, breaking your link with Eurovision 2019. No professional engagement is more important than standing on the right side of history and supporting a struggle for dignity and justice. 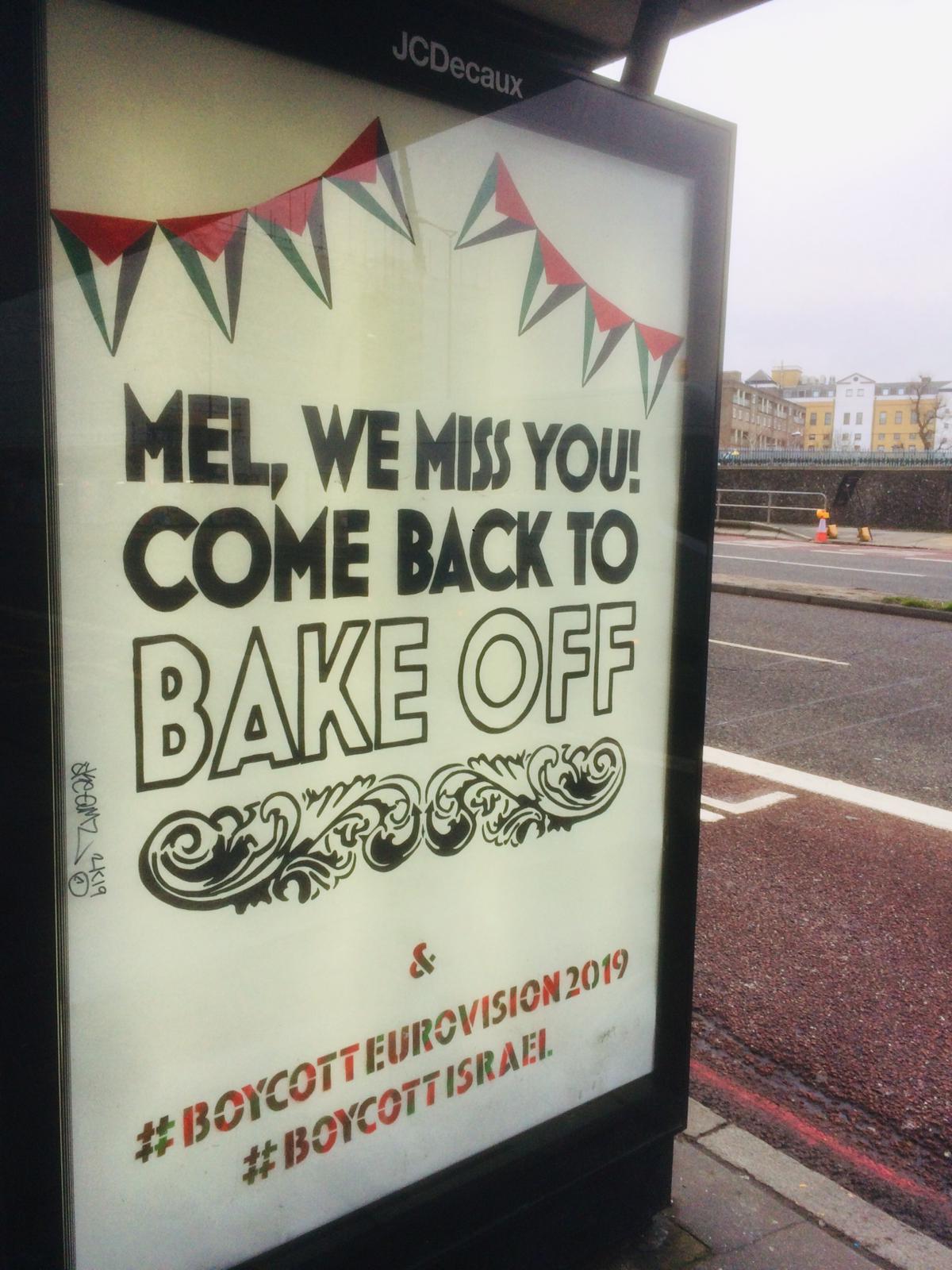 Ahead of Eurovision: You Decide on Friday 8 February, subverts appeared across London with a message for Mel Giedroyc. Playing on the Great British Bake Off logo, the posters had fans asking Mel 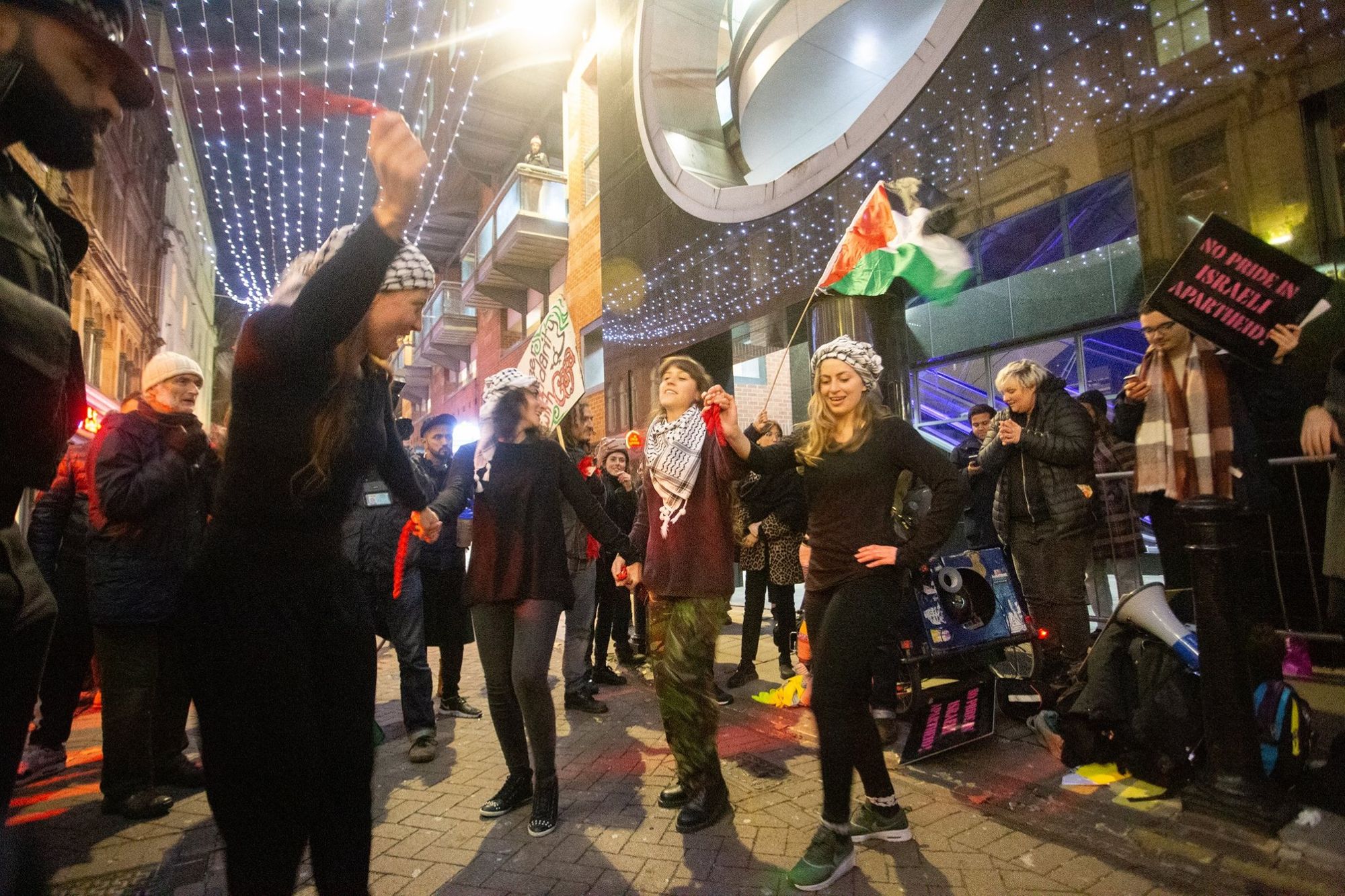